Battambang: A man has been arrested in connection with a case of putting poison in a water tank and attempting to kill his family, including three children because he was suspicious and jealous of his wife.

On the morning of the incident, the wife got up and poured out kettle water to drink as usual, and suddenly saw the water was blue. She checked the water tank and found the water was also blue. This raised suspicions that her husband may have taken poison and mixed it with water to kill the family.

She then called the village chief to help check the blue water.

The village chief stated that after checking the water, he found out that it was mixed with poison. The suspect came for questioning and he admitted that he was angry with his wife and suspected she was having an affair with another man and had the idea to kill the family.

Mr. Pang Heang, District Inspector (*not clear which district), stated that after the experts questioned the man and collected evidence, the case was sent to the Battambang Provincial Police Commissioner’s Office of Serious Crimes, which is scheduled to be sent to court on August 2, 2021. KPT 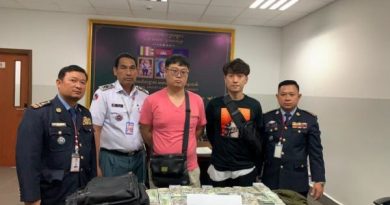