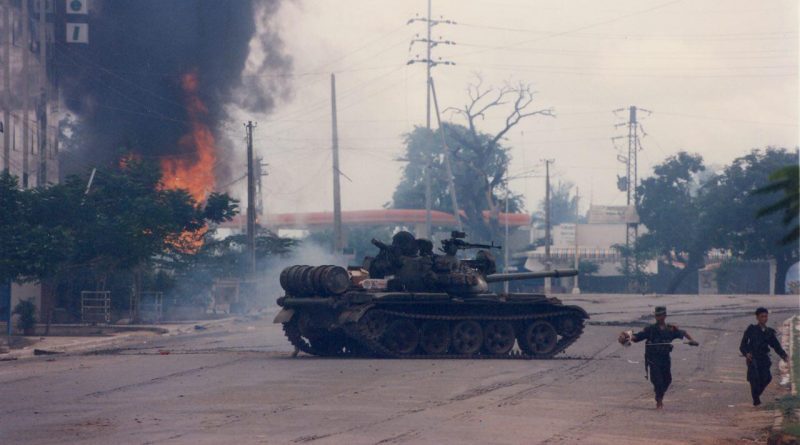 On July 2, 1969, The United States and Cambodia reestablished diplomatic relations.

On July 2, 1994, a coup attempt was made on the FUNCINPEC-CPP coalition government by several CPP members- headed by Prince Norodom Chakrapong, Sin Song and Sin Sen- who felt they had been left out of the new shared political sphere- and Thai businessmen close to Thaksin Shinawatra who had lost lucrative contracts. A convoy of tanks and armored personnel carriers left from the plotter’s stronghold in Prey Veng and were intercepted by FUNCINPEC forces under General Nhiek Bun Chhay on the outskirts of Phnom Penh.

On July 3, Sin Song was arrested at his house, and later escaped to Thailand, where senior Thai officials protected him. Sin Sen was arrested a few days later as he was boarding a plane out of the country. He was sentenced to 18 years, but released after 17 months. A number of Thai nationals were sentenced to long prison terms, though they were later released and returned to Thailand.

On 3 July 1953, the French government declared itself ready to grant full independence to the three states of Cambodia, Vietnam, and Laos.

On July 3, 1958, the Vietnam Presse newspaper published a story highly critical of Sihanouk, entitled ‘A Ninny’s Policy’. The next day on July 4, the article was followed on by a Times of Viet-Nam piece entitled, “What Is Sihanouk Up To,” possibly written by Ngo Dinh Nhu, described as not “inflammatory” but “disobligingly blunt.”

On July 4, 1962, Cambodia signed the Protocol to the Convention for the Protection of Cultural Property in the Event of Armed Conflict.

On July 5, 1958, Prince Sihanouk gave a speech at Kampong Cham, as relations with South Vietnam deteriorated. “For our tranquility we ought to choose a great ally who is not too far from us and who is ready to aid us. I do not mean that we want an ally as in the time of the protectorate. I do not think we ought to go as far as that. Our peaceful means have not yet been exhausted. On the other hand we should not hesitate to find flesh-and-bones ally to prepare ourselves against every eventuality”.

Later in speech he complained that the US were not supporting Cambodia. “While RKG has asked US to go to verify facts on the spot, US contents itself to say, of what use? The incident is closed as has been established. The free world insults us and we are to blame but it refuses to verify our charges. How can they say we are guilty if they refuse to check? The US considered my meeting with Diem a good idea but sensing that this meeting might bear fruit and that new violations might not recur they pushed the (Vietnamese) newspapers and the members of the government to oppose the meeting. These acts wound us but do not discourage us. The basic means of our neutrality are not exhausted. If they were we would be obliged to seize whatever means there might be at our command in order to live”

The Americans advocated a policy of persuading the South Vietnamese and Cambodian sides to resolve their differences, with Ambassador Strom writing “The solution of this problem would clearly seem to be settlement between Cambodia and Vietnam. This is desired by all the Western powers represented here, US, UK, France and Australia, and certainly by Cambodia. Sihanouk seemed to have removed the greatest difficulty, namely the question of who should make the first approach, by volunteering to go to Saigon. However, after having been told he would be received, whole project fell through as result bitter and vicious attack on Sihanouk in semi-official Vietnam Presse July 3…..However, in absence firm action by US, GVN has acted and, in effect, established policy for West vis-à-vis Cambodia which is exactly contrary to policy desired by all Western powers represented here. Even if negotiations can be rescheduled, they will not succeed unless (President) Diem can be persuaded GVN’s self-interest makes success desirable. I do not believe we have any choice except to present matter to Diem as vital to his own interest and to that of West and to insist on negotiations with Cambodia in good faith.“

On July 5, 1970, Norodom Sihanouk was condemned to death in absentia by Phnom Penh, and his wife to life in prison.

On July 5, 1973, Sihanouk arrived back in Beijing after an 11 nation tour seeking support for his exiled government, which included the Khmer Rouge.

On July 5 1997, factional fighting, referred to many as the ‘1997 coup’ broke out, CPP troops led by General Ke Kim Yan surrounded a military garrison belonging to Nhek Bun Chhay in Kampong Speu Province. Ke Kim Yan attempted to coax Nhek Bun Chhay to disband his garrison, but failed. At the same time, military police aligned to the CPP approached the residence of another FUNCINPEC general, Chao Sambath, and demanded FUNCINPEC troops surrender their weapons. Nhek Bun Chhay responded by ordering FUNCINPEC troops to resist the advances made by the CPP’s troops and military police, and heavy fighting broke out at the Taing Krassang military base and Phnom Penh International Airport, where most of FUNCINPEC troops were based.

On July 5, 2006 —The International Finance Corporation, the private sector arm of the World Bank Group, agreed to provide a long-term loan of $5 million to ACLEDA Bank Plc of Cambodia.  The loan was to help the bank expand its lending to micro borrowers and small and medium enterprises.

On July 7, 1980, India provided diplomatic assistance (diplomatic recognition) to the Heng Samrin led government in Phnom Penh. The Indian embassy would open in 1981.

On July 7, 2008, Preah Vihear temple was listed as a since the UNESCO World Heritage Site.

On July 7, 2018, a three-week-long campaign for the general election began. The election, held on July 29, came after the main opposition party, CNRP was disbanded in November 2017.

On July 8, 1973, President Nixon promised to stop the bombing in Cambodia on August 15 and not to resume it unless authorized by Congress. Around 53,000 tons of explosives were being dropped every month over the country.

On July 8, 2017, the Temple Zone of Sambor Prei Kuk, Archaeological Site of Ancient Ishanapura was listed into World Heritage List.

From July 8 to July 9, 1985, ASEAN foreign ministers met in Kuala Lumpur and adopted a Thai compromise proposal that called for “a form of indirect or proximity talks” between the the exiled CGDK and Vietnam. The proposal noted that the Heng Samrin regime could attend the talks only as part of the Vietnamese delegation. The CGDK, China, and the United States backed the Thai proposal, but Phnom Penh and Hanoi rejected it as a scheme to restore the Pol Pot faction to power. 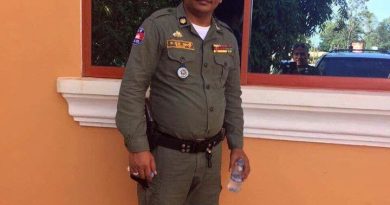 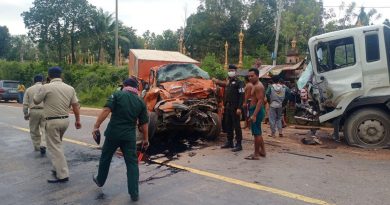