Preah Sihanouk Province: Provincial Military Police conducted an operation to arrest the mastermind of a land grabbing team, along with some of his henchmen in Puy Machou area, Koki village, Bit Trang commune, Prey Nob district, Preah Sihanouk province. A handgun was also seized, and the case was being prepared to be sent to court for legal action on February 2, 2021.

The mastermind of the land grabbing, Koy Sun, a former general and his party often illegally seizes people’s land and state land in Koki village, Bit Trang commune, Prey Nob district, Preah Sihanouk province, with a big ringleader in Phnom Penh behind it.

Authorities are building a case to be sent to court for legal action. Many other such groups are still active, and Sihanoukville authorities are taking steps to eliminate them through a series of arrests. The case of land grabbing in Sihanoukville came after the presence of Chinese investment in the coastal province. In particular, land disputes have become a very complex issue for the authorities, as some lands have up to 10 owners.

It is generally observed that those who have power and money will have the advantage of winning to become landowners. The little ones become victims. 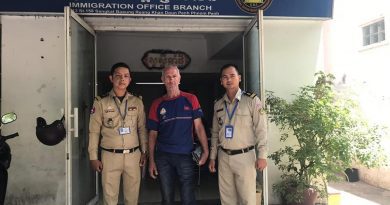 Aussie Over Stayer Hands Himself In 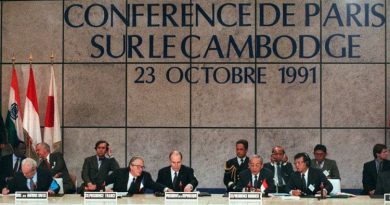