Phnom Penh: A fire broke out in a condominium building due to an electric malfunction, prompting the fire brigade to intervene.

The incident happened at 10:30 AM on August 7, 2020 at the DE CASTLE building along Street 315 in Sangkat Boeung Kak II, Khan Toul Kork, Phnom Penh.

According to the police report, Chai Chhean, male, 34 years old, is the manager of the above condominium building.

According to sources from the people at the scene, they saw smoke coming out of the condo,and ran to report to the police for help. Police immediately contacted the fire brigade to intervene. Immediately, the police sent two fire trucks, but apparently when they arrived at the above location were not needed because the manager of the condominium was able to extinguish the fire completely.

No one was injured, and the cause is was due to faulty electrics on the 6th and 7th floors. NKD 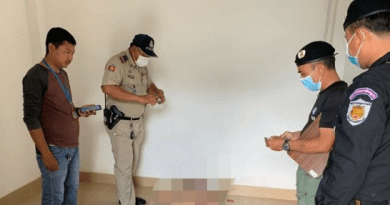