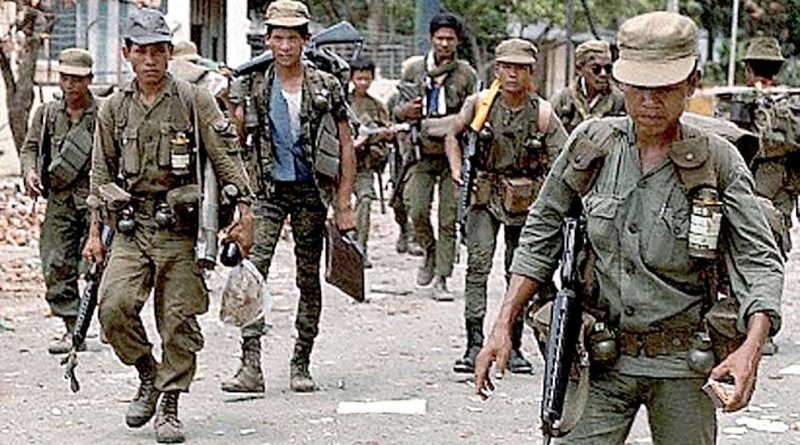 This is the second installment of the Military History of Kampot series. Part One is available to read HERE

The civil war between the Khmer Republic’s FANK and the loose alliance of FUNK with NVA and VC units ground on into 1971.

In some ways the invasion of 1970 by US ground forces and ARVN units had some success in pushing the rebel groups into the jungles, but the initiative was never followed up.

In a converse way that sums up much of the American adventure in Indochina, the Khmer government and bulk of the civilian population welcomed the offensive to drive the Vietnamese out of the country. Public opinion in the US was the polar opposite, with mass demonstrations- the most infamous leading to the Kent State massacre in Ohio, where National Guard fired upon students on May 4, killing four and injuring nine.

The US reverted to another aerial campaign, Operation Freedom Deal, unleashing the B-52’s once more over Cambodian skies. The consequences are still a source for debate.

One effect was for rural refugees to pour into built up areas, abandoning farmland. Those who remained faced the danger of bombardment and the increasing cruelty of living outside the government areas in communist proclaimed ‘liberated zones’. The liberated zones in MR2 by stretched almost 100 km from the north of Kampot to just south of Chhbar Mon, the provincial town in Kampong Speu, west to lower Koh Kong and east to the Mekong.

In December 1970 Nixon’s dissatisfaction with the success of the bombings prompted him to order that they be stepped up. A transcribed telephone conversation between the president and Henry Kissinger reported him to say “They have got to go in there and I mean really go in….. I want them to hit everything. I want them to use the big planes, the small planes, everything they can that will help out there, and let’s start giving them a little shock.”

The bombings did, however, prevent the guerilla forces from massing in significant numbers and kept them at bay within their own areas of control. They also severely hampered the supply lines heading into Vietnam from Southern Cambodia, but the exact numbers remain contested by different sides.

Following the partial success of Operation Chenla in the northeast, the FANK had become better equipped thanks to US military aid and a recruitment drive swelled its ranks to over 100,000 troops. Buoyed by this, Lon Nol ordered an attack around Kampong Thom, codenamed Operation Chenla II, launched on August 20, 1971.

Initial success led to catastrophic failure, due partly to poor discipline from FANK troops, weak command and an unexpected counterattack by NVA and VC units. The FANK, now having lost any chance of regaining the countryside, and with American support constrained by political entities in Washington, retreated to the garrisons and further operations were aimed at relieving areas under siege, rather than attacks.

The first three months of 1972 saw a lull in the fighting, as NVA and VC units concentrated on logistics for the upcoming Nguyễn Huệ Offensive (Easter Offensive) against South Vietnam.

In March, ARVN’s 93rd Ranger Battalion and 12th Armored Brigade came under a heavy assault around Kampong Trach. Between the 23rd-30th South Vietnamese troops fought off three ground attacks and were hit by over 500 rockets and mortar rounds.

Bokor mountain was abandoned by the FANK in 1972, and was quickly taken up as a stronghold by the guerrillas.

The ‘liberated Southwest Zone’ was under the command of a veteran of the Khmer Issarak movement, known to be both ruthless to his enemies and respected by his men. Chhit Choeun, alias Ngon Kang, but better known as Ta Mok, who had taken up the cause in 1948.

A native of Tram Kak in Takeo province, Ta Mok had been a child monk, until disrobing aged 16 to take up armed rebellion against the French. He gained a reputation as an uncompromising fighter. As an Issarak leader he clashed with rival right-wing leaning Issarak rebel Savong Vong in Kampong Speu, Takeo and parts of Kampot.

In the early 1960’s he met a rising figure in the underground Cambodian communist party named Saloth Sar (Pol Pot). A few years later Ta Mok had become a general and chief of staff in the anti-Vietnamese faction of the communist movement, known today as the Khmer Rouge.

In simplistic terms, the communist branch of the FUNK was splitting into two rival factions. The first were the ‘Hanoi Set’ dubbed “hardcore Khmer communists” by a CIA report of 1973. Many of these were the founding members of Khmer communism and had received training, both ideological and military, from North Vietnam in the 1950’s and 60’s, and included those who had fled across the border to avoid Sihanouk’s earlier crackdown on the left.

The other was the ‘Paris Set’ the so called “Khmer Rouge”  of Pol Pot, Ieng Sary and Khieu Samphan, who were introduced to communism while studying in France. This group opposed the restoration of Sihanouk, were ultra-nationalistic and deeply distrustful of what the real aims of ‘the traditional’ enemy of Vietnam were when the war was over. The issue of Kampuchea Krom, former Cambodian territory around the Mekong Delta ceded to Vietnam was an almost mythical cause.

Ta Mok, whose education came from fighting in the jungles, had no love for the Vietnamese, nor for the social Buddhist order of Cambodia. By 1971, he was already becoming infamous for his treatment of FANK prisoners and unwilling civilians living in his liberated Southwest Zone. He was reported to have eliminated a more moderate Zone Deputy Party Secretary and Region 11 (Koh Kong) commander by the name of Prasith.

Locals called cadres and officials led by Prasith the “Free Khmer Rouge”, who were a stark contrast to Ta Mok’s authoritarian rule. There was a ‘liberal attitude to travel and trade’ and a ‘good relation with the people’. This ended when Pasith was executed and control was absorbed by Ta Mok.

A sign of things to come was evident in 1973, when troops from the neighboring Eastern Zone, under Hanoi backed commander Heng Samrin (current President of the National Assembly) were sent to Chisor mountain inside the Southwestern Zone to collect herbs for fighters sick with malaria. Twelve were taken away by Ta Mok’s men and killed. Despite requests from Eastern Zone command and party leaders, the men were never returned.

Troops from the Eastern Zone, who wore a mix of army fatigues (donated from China) and the Southwestern Zone, who were only permitted to wear black, then dug in and trained their guns on each other and kept and uneasy watch on one another from inside their own territory.

The Battle of Kampot

By 1974 the communists were beginning to sense victory was with their grasp. The following information is taken from Lieutenant General Sak Sutsakhan, the Commander-in-Chief of the Armed Forces, as Chief of the General Staff, FANK, Ambassador, and as the last Chief of State of the Khmer Republic (The Khmer Republic at War and the Final Collapse-1980).

On February 26, under the command of Ta Mok, the communists began a bombardment of the town, pounding it with 107mm rockets and 120mm mortar rounds. An estimated 1,500 FANK troops were inside the town, with 300 or so of the 210th and 68th Battalions deserting their posts in the first days of the battle.

The 12th and 68th Brigades had fallen back without orders to do so, allowing the attackers to take control of the town waterworks. With water supplies dwindling thousands of civilians fled (*most likely towards the more heavily defended port of Kampong Som).

Reinforced by naval, air and artillery support, the 12th and 20th Brigades were sent to Kampot for a counter-attack. Although ordered to head northeast, parallel with Road 3 to retake the strategic Chakrei Cement factory (a cement industry still exists near Chakrey Ting). Instead of going forward, both brigades took up defensive positions, giving the communist forces time to dig in.

Between 2-10 March two more army battalions, some Navy personnel and two 105 mm Howitzers were deployed to Kampot, under Major General Mhoul Khleng who took command of all FANK forces in the area.

Supplies came in by air, including four new howitzers sent to replace old units. Early rain in mid-March helped to take away some of the pressure on the water problem, and more priority was given to the airlift. During March FANK had lost 158 men killed and 828 wounded. They had managed to kill 282 of their enemy.

A major blow came for the FANK when defensive positions on Hill 169 were abandoned after being encircled. This hill dominated the airfield, and it was abandoned on at the begining of April.

The dire situation was compounded by the fall of the historical and cultural former capital of Oudong, north of Phnom Penh and about 160 km from Kampot.

By April 10, the attackers were just 1.5 km from the town center on the western perimeter. With the southeast being abandoned by the Navy, the town was cut off from being resupplied either by air or sea. At the same time, artillery rounds struck the ammo dump with around 3,500 105 mm howitzer shells. Eight FANK artillery pieces were now out of ammunition and useless.

Heavy fighting on the 8th and 9th had resulted in 86 communists killed by the 28th Brigade and a further 100 by the 20th Brigade on the western flank. Reinforcements were sent in, and by April 9, FANK troop numbers inside the defensive perimeter had risen to just over 4,000. This rose again to 4,561 in the next two weeks as FANK troops began to push back, re-establishing the northern defensive line to 2.5 km out of the city. In the east, Kbal Romeas was retaken and the supply route up the river was also reopened.

In the months of March and April FANK casualties stood at 416 killed (including 25 civilians) and 2,363 wounded (88 civilians). The attackers had lost an estimate 2,360 killed.

Writer’s note: What happened next is unclear. The Wikipedia page ‘Battle of Kampot’ writes that the result ended in a total victory for the attackers on April 2, 1974. This contradicts the report from Lieutenant General Sak Sutsakhan, who makes no mention of Kampot again after May 3, with it still appearing to be in FANK hands, although the airport had been lost. The General continues in great detail about fighting in other regions, especially around Phnom Penh. Without better sources, it can be assumed that Kampot town was not overrun, but held out in some degree of isolation until Phnom Penh fell on April 17, 1975. If anybody has more information, please share.

It is likely that the town remained besieged, as Ta Mok and his forces concentrated on seizing Phnom Penh.

What is certain is that shortly after the fall of the Khmer Republic, the Southwest Zone was divided, with Koh Kong and Kampong Speu becoming the West Zone. Kampot, Takeo, Kampong Speu (up to Road 4), and Kandal west of the Mekong were in the reduced Southwest Zone under control of Zone Secretary Ta Mok. Kampot was Region 35.

FANK soldiers, along with people who held any positions under the former regime were rounded up and executed. 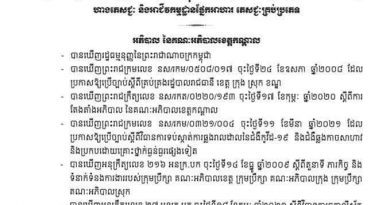 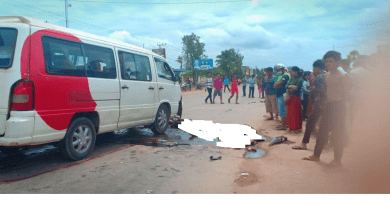 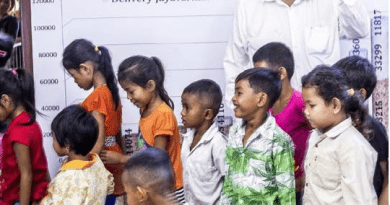