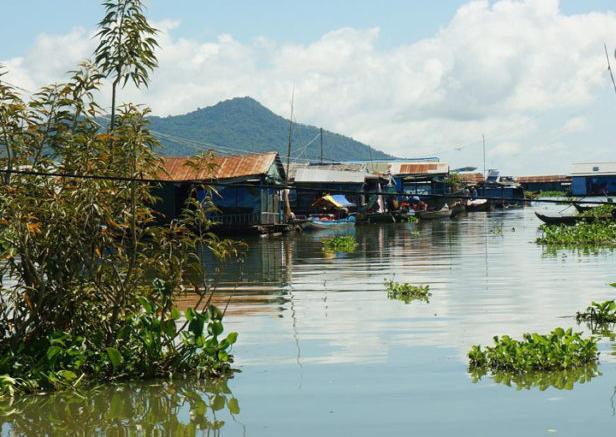 CHNOK TRU, Cambodia (Thomson Reuters Foundation) – Troung Van Long is Vietnamese in name only. He was born in Cambodia and has lived there for decades, including many years in a floating house on the Tonle Sap lake where he still lives.

But his days on the water are numbered.

Citing concerns over pollution and overfishing last year, Cambodian authorities have moved hundreds of ethnic Vietnamese families in the central province of Kampong Chhnang to land.

More than 1,000 ethnic Vietnamese families, including Troung Van Long’s, who are still on the water will be relocated to land in the coming months, provincial authorities have said.

“Why move us from the water? We are not in anyone’s way, and there is nowhere else for us to go,” said Troung Van Long, seated on the floor of his blue-colored houseboat.

“The officials say we are polluting the water, but it is industries and city people who do that. We just want to make a living from fishing – we will starve if we are moved,” he told the Thomson Reuters Foundation.

Ethnic Vietnamese are the largest minority group in Cambodia, comprising nearly 50,000 families, or more than 180,000 people, according to government data. Human rights groups say the figure is about four times higher.

Most are stateless, as they are not citizens in Cambodia or Vietnam, and face “significant barriers” in accessing education, health care, formal employment, banking services, freedom of movement, and owning property, the United Nations said.

In recent years, thousands of ethnic Vietnamese families have been repatriated to Vietnam. Those who were moved from the water are in settlements that lack adequate housing, drinking water and toilets, according to human rights groups.

“They did not choose to make their houses on the river; it was forced upon them by their dire circumstances and lack of rights,” said Butmao Sourn, executive director at non-profit Minority Rights Organization (MIRO) in Phnom Penh, the capital.

“They do not have the legal right to buy property, so they live on the water in fragile homes, exposed to the elements and to health risks. They are not better off on the land either, because they are not welcome there,” he said.

Cambodian authorities say relocation of the floating communities is necessary to address overfishing and illegal fishing, water pollution and damage to the lake’s ecosystem.

“They can’t live on the water permanently. They need to settle on land,” Chhour Chandoeun, governor of Kampong Chhnang province, said on the phone.

“Many families have already moved voluntarily. We are building suitable infrastructure for everyone,” he said.

Cambodia shares its eastern border with Vietnam. Waves of Vietnamese migration took place during the French colonization starting in the 19th century, according to historians.

After Cambodia gained independence in 1953, new laws gave some “aliens” in the country the right to apply for naturalization. But these laws were subsequently tightened.

With the Khmer Rouge take-over in 1975, tens of thousands of ethnic Vietnamese were expelled or executed, their documentation and property confiscated or destroyed, according to human rights groups.

After the fall of the Khmer Rouge regime in 1979, thousands of Vietnamese returned to Cambodia. Many made their home on the Tonle Sap.

But their legal status and living conditions have remained insecure, said Christoph Sperfeldt at the University of Melbourne’s center on statelessness.

“Ethnic Vietnamese groups have lived in Cambodia throughout contemporary history. Yet many communities are marginalized in society, with little access to services and development opportunities,” he said.

Around the world, up to 15 million people are not recognized as nationals by any country. They are at a “heightened risk of exploitation, human trafficking, arrest and arbitrary detention”, according to the U.N. refugee agency (UNHCR).

Cambodian authorities began issuing permanent resident cards in 2015 to ethnic minorities for a fee of 250,000 riel ($62) each. It must be renewed after two years, and holders are eligible for nationality after seven years.

But “insisting on legal identity requirements for accessing rights and services could have the effect of further excluding the most marginalized, who face serious impediments to obtaining a legal identity,” said Sperfeldt.

Cambodian government spokesman Phay Siphan said the permanent resident cards will ensure that ethnic Vietnamese have legal status to stay in the country.

Cambodia is not a signatory of the 1954 Stateless Persons Convention that grants the right to education, employment, housing, travel documents and administrative assistance.

Most ethnic Vietnamese in the country do not have birth certificates. So children go to informal Vietnamese schools rather than state schools, according to a recent study by MIRO.

Many children begin working with their parents from a young age.

Warmer temperatures and overfishing have reduced the flow of water and the catch in the Tonle Sap, according to environmentalists, further hurting the ethnic Vietnamese.

In Kampong Chhnang, a five-year plan launched in 2015 aims to restore the Tonle Sap, beautifying the waterfront and promoting tourism. That requires removing the floating villages.

Last October, more than 200 ethnic Vietnamese families were moved to a resettlement area in Chnok Tru village, about 135 km (84 miles) from Phnom Penh. It has no running water or toilets, and is not close to the river, residents said.

“It’s difficult here. On the water, we could fish, we could make a living, we could move about easily,” said Ho Thi Ha, who sells coffee and snacks from a small shop.

“Here, it gets flooded when it rains, and we can’t go anywhere. Some people have left because they had no money,” she said, pointing to abandoned wooden homes.

Local authorities said the families will be moved to another site nearby, after facilities are built.

A few kilometers away, dozens of floating villages bob on the Tonle Sap. Boats selling vegetables and snacks putter up and down, and children shriek as they dive in the water.

But the seeming tranquillity belies their uncertain future.

Heang Kimly, 30, said she worries about making a living on land, and the fate of the fish they rear in bamboo cages.

“We have lived on the water for a long time; it is the only life we know. If the authorities allow us, we would prefer to remain here,” she said.

“But perhaps my children will have an easier, better life on land if they can get Cambodian citizenship and get a good education. Then they can be more secure.” 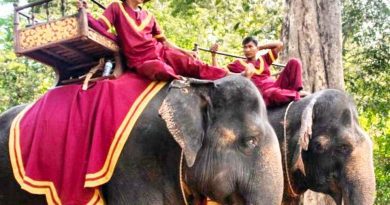 Phasing Out Of Angkor Elephants Begins 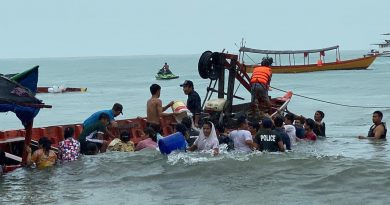